This site requires JavaScript. Click here for instructions on how to enable JavaScript in your web browser.

Founded in 1960 the Club is established in the United Kingdom but has an international membership catering for all owners and enthusiasts.
The club currently has 492 members in 26 countries, who between them own 181 examples of the 18TR model, and 243 of the 20TR model. There is currently 1 car for sale in the Members Section. 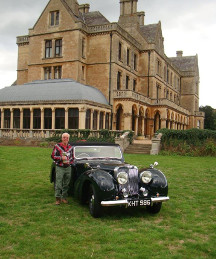 The club is run by an annually elected management committee of volunteers. There are correspondents throughout the UK, Europe, North America and in Australia and New Zealand. The club is an excellent point of reference for sourcing spares and providing technical information regarding the restoration and operation of Roadsters. On these pages you can find details of membership, a list of relevant events, and browse our photograph album. Club membership gives you access to the Members Section, where you will find current and past copies of the club magazine with technical index, officials directory, a forum to discuss roadster matters, library, and the on-line store containing manuals, regalia, and spares.

The next TRCL Annual Rally will take place on Sunday 11th September 2022 at
Charlecote Park Warwickshire.

CURRENT MEMBERS:
The renewal period opens after the AGM on Sunday 11th September 2022.
No membership renewal payments will be accepted until that date.
NEW MEMBERS:
Membership is open to owners of and anyone interested in the Triumph Roadster manufactured between 1946 and 1949.
Our annual membership year runs from 1st January to 31st December.
New / rejoining membership applications made on or after Saturday 1st October 2022 will run to the end of 2023.
There are no pro-rata subscriptions for less than 12 months membership.
N.B. Renewal payments by current members for 2023 will NOT be accepted until after Sunday 11th September 2022.


If you require help with your application please  the Membership Secretary.


By applying for membership, you agree to be bound by The Triumph Roadster Club Limited:


The procedure consists of:
Please note that you cannot pay directly from your own PayPal account; you must use this website facility,
or your payment may not reach us, and you will be responsible for recovering your funds.

Subscriptions include postage & packing where applicable.


These are available to current members only:


The access codes to the TRCL Members Section are only available to current members,
and must NOT be divulged to non-members. They are valid from 1st March for 12 months.
The codes can be found: Please check your ‘Spam/Junk’ folder for emails from TRCL, and make us an approved sender if necessary.
If you still require assistance please  the Web Master.

The Webmaster cannot solve these problems for you. Please seek local help if necessary.

Please contact the appropriate committee member with your query.
TRCL is run by volunteers, who will endeavour to respond as soon as possible.


Within the United Kingdom there are a number of regional Centres providing contacts between members, and organising local events (see Contacts page in the Members Section).
In addition TRCL has loose associations with the Pre-1940 Triumph Motor Club, the Triumph Razoredge Owners Club and the Mayflower Club, and from time to time combined events are held with one or more of these.


TRCL is a member club of:


The Triumph Roadster Club Limited (TRCL) is incorporated in the U.K. and governed by the laws of the U.K., and it has no operations overseas. However membership can be drawn from a world-wide base, albeit with certain restricted services in some parts of the world due to insurance constraints. Members living overseas can maintain contact with the Club either directly or, in certain areas, through our overseas Correspondents as listed on the Contacts page in the Members Section.


The details on the Club's web site are regularly updated and only these should be referred to when making contact or enquiries.

There are a number of entries on the Internet referring to the Triumph Roadster Club/TRCL and to Regions and other groups relating to them, and in some cases they offer contact details.
These entries often appear on the sites of magazines and other clubs, groups, or individuals, and are frequently either inaccurate or out of date and they are not part of the Triumph Roadster Club.

Users of this website should be aware of the following:


Disclaimers:
Legal:
The Triumph Roadster Club Limited is a Company Limited by Guarantee. Registered in England under No 06673901.
Registered Office The Old Brew House NN12 8JB.